Taking your studies overseas for part, or all, of your course can be one of the most exciting prospects of student life. Opening you up to an entirely new culture, new people and a new way of life all while mastering your chosen subject. For many students, this has also been an avenue to moving to their place of study long term, and with COVID-19 restrictions having eased worldwide, the opportunity to learn elsewhere is becoming a reality yet again.

So similar to how we previously found where the world wants to live the most, we wanted to discover which countries are most popular for the world’s student population – and why?

To do this, we looked at global Google search data to reveal where the inhabitants of 164* countries are searching to study in the most, outside of their home country. Analysing the average monthly search volumes for phrases commonly associated with researching studying in another country and ranked by the most searched-for study location within each country, we were able to find which locations were coming out as the most popular. Below is what we found…

Which are the most searched for countries for studying overseas?

Echoing our results when researching where the world wants to move, Canada once again tops the rankings, with students evidently being just as drawn to the country as those looking to permanently relocate. 36 countries in total, with everywhere from Colombia to Jordan searching to study here the most.
But why is Canada so popular for students looking to study abroad? Firstly, the country itself proves to be such a draw. You’ve got sprawling cities paired with beautiful scenery, alongside notoriously friendly locals, strong healthcare and a good amount of job opportunities to help you earn while studying, or even after the course is complete.

All of this combined makes it no surprise that Canada features prominently in the Global Peace Index, but outside of just the Canadian experience, its education really wins out.

The country plays host to 10 of the top 250 universities worldwide, an accolade not many nations can boast, with the University of Toronto, McGill University and the University of British Columbia featuring as some of the very best. Regularly voted as having some of the best student cities too (Montreal, Toronto and Vancouver) it’s not hard to see why Canada is so far ahead of the competition in our research, with the inhabitants of 36 countries searching to study here.

That’s not to say that other countries aren’t great for students however, with the top 10 packed with great options for studying. Favoured by 13 countries worldwide, Spain ranked in second place, thanks to its vibrant culture and great climate alongside good study options. England featured just behind in third, widely revered for its renowned universities such as Oxford and Cambridge, you’ll find universities in most cities, with many specialising in particular subjects.

To provide an at a glance view of where the world wants to study the most, we’ve created the colour-coded map below. 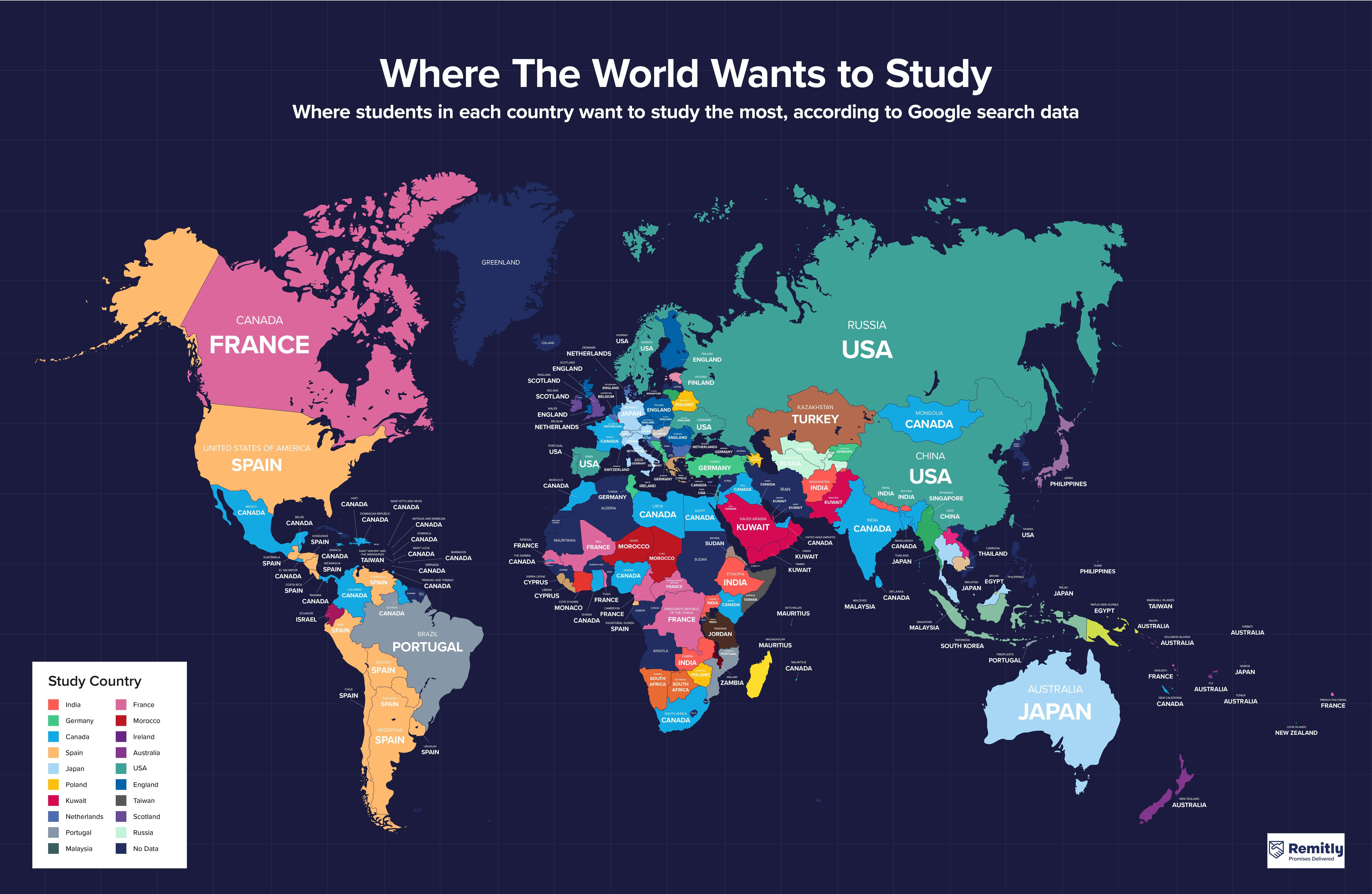 As universities themselves can be as much of a draw as the country they’re located in, we also took the top 2,000 ranked universities in the world according to the Center for World University Rankings for 2021-22, to see which are being searched for the most.

Arguably one of the most well-known and prestigious universities in the world, Harvard University takes the top spot in the popularity rankings, with almost 10 million searches every year. With alumni including Natalie Portman, George W. Bush and Facebook creator Mark Zuckerberg, the university is surrounded by intrigue from around the world, with only a select few lucky enough to enrol at the university.

US universities’ dominance in these rankings suggests that people are searching for exact educational institutions in some cases, rather than the country as a whole, with American universities featuring 17 times in the top 25. The United Kingdom also features three times, with England’s two most historic universities, Oxford and Cambridge ranking alongside Scotland’s Edinburgh University.

Known as one of the best universities in the world, India’s University of Delhi also features, ranking as the 13th most searched university in the world. Founded in 1922, alumni include past Prime Ministers of India, film directors and prominent Indian sports stars. 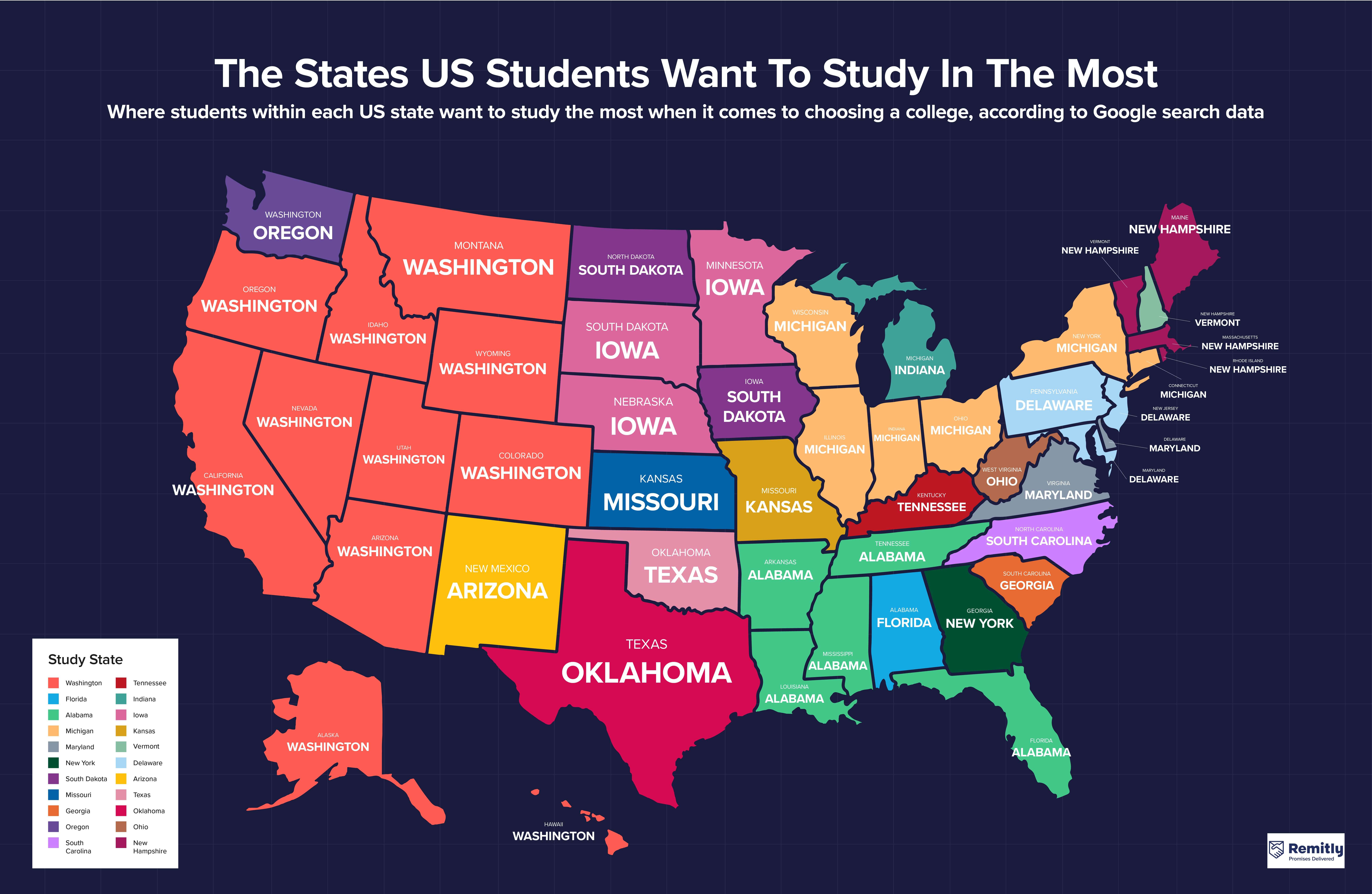 With the United States dominating the searches for particular universities, in addition to college life being such a fixture of American culture, we wanted to delve deeper into where U.S based students are actually planning on taking their studies at a state-by-state level. College in America for US residents means the opportunity to learn in an entirely new state, and the chance to study at a college regarded for its sporting prowess or academic distinction.

As is evident from the map above, Washington stands out as the preferred option for many US based students, with the state offering a host of college choices, including Seattle’s University of Washington, Washington State University, as well as the highly rated Gonzaga University, a private university with sport at its core.
Michigan also proved its popularity, thanks to the likes of the University of Michigan, known as one of the most prestigious universities in the whole of the United States, home to top quality academics and research facilities.

If any of these states and countries are tempting you to study abroad or even move overseas longer-term, you’ll be able to transfer money securely and conveniently with Remitly. A great option for parents with children studying overseas, or anyone who has moved permanently to work. To find out more and for some tips and advice on immigration, visit our blog!

Google search data (searching all languages) was used to establish the average monthly search volume in each country for common search terms associated with studying abroad, such as ‘study in [location]’, ‘university in [location]’ and ‘university courses in [location]’ for every country in the world. This was then replicated within America to find which states are most searched by students looking to study elsewhere. The most searched for study location was then used as the top location for the specific country/state. Data correct as of September 2021.

With Remitly, more of your money makes it home

Remitly's vision is to transform the lives of immigrants and their families by providing the most trusted financial service products on the planet. We do that by providing a fast, safe, and secure way of sending money with great rates and low fees.